This post is about getting started with Android Wear.

At the time of this post, the Android Wear SDK is still in preview.

This is much more promising and happening than other Android related attempts by Google (ADK/accessories, home automation, Nexus Q). And finally this might give some life to Google Glass as a consumer device, which will turn out to be just another wearable.

While the initial preview is limited to notifications, even near-future versions appear pretty good.

Before the first steps, the URLs to bookmark:
The official resource site: http://d.android.com/wear/
This blog androidwearable.blogspot.com
Join this official community on Google Plus http://g.co/androidweardev

If you don't already have Android SDK (ADT bundle or Android Studio) install it first. And then download the latest API through it.  http://d.android.com/sdk/index.html

In response, you'll get a mail from google with a private Google Drive attachment and few URLs. The content goes something like this:

Download the attachment (AndroidWearPreview.zip) and unzip it somewhere near your Android SDK. Apart from the usual (license and dummy readme files), it has the wearable-preview-support.jar and few samples:

Before we start working, finish the housekeeping task of opting in as tester. Once done it may take few minutes before it lets you download "Android Wear Preview" application from a private link.

Here's how your page at  https://play.google.com/apps/testing/com.google.android.wearablepreview.app
should look once you've been accepted as a tester: 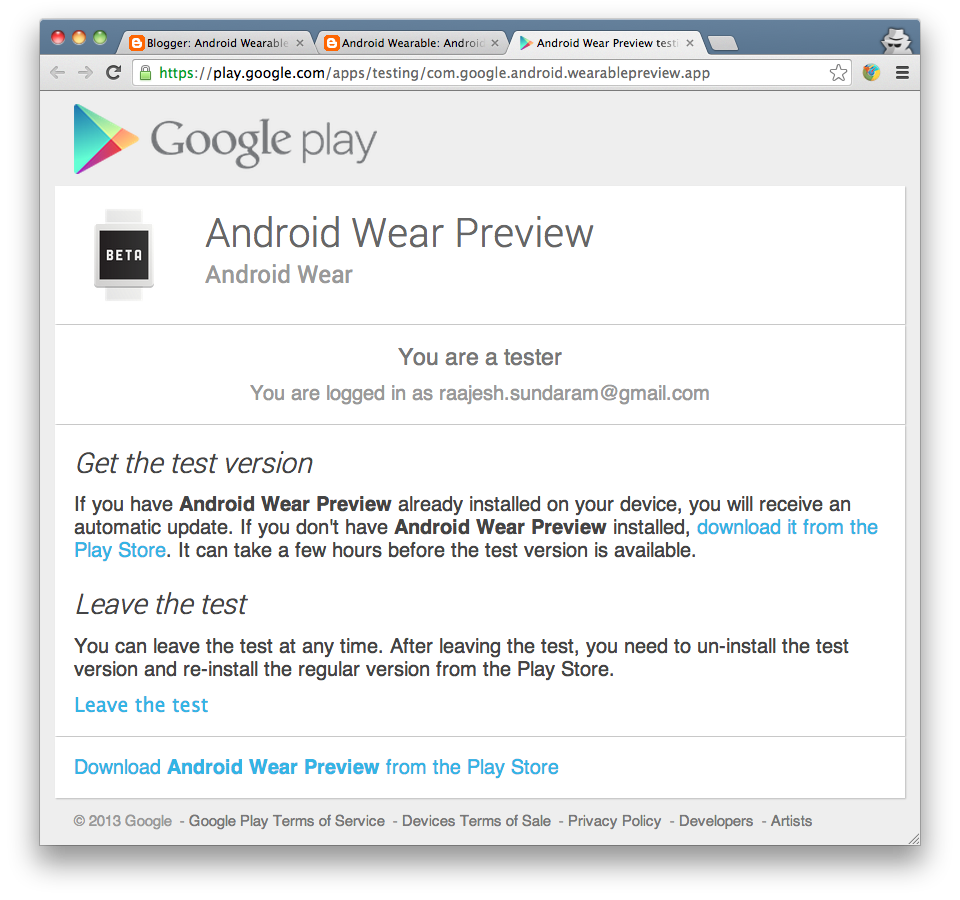 It has links to the app. Download and install that to your Android phone/tablet running latest (4.3 Jellybean) firmware.


For the AVD Name, be creative or just pedantic and call it "awr_19" for round or "aws_19" for square depending on whether you want to create an emulator with a square or round display for target API level 19.


Leave all other options set to their defaults and click OK.
Although real Android wearables do not provide a keyboard as an input method, you should keep Hardware keyboard present selected so you can provide text input on screens where users would actually provide voice input. For this purpose

The Android Wear emulator now starts. To begin testing your app's notifications, you must now pair the emulator to your development device that has the Android Wear Preview app installed.

Caution: Do not install apps on the Android Wear emulator. The system does not support traditional Android apps and the result of running such apps is unpredictable.

Wait for a minute or two. Woohoo. It might appear darker. Click on it to wake your Android Wear Emulator up.

If you see this emulator screen you are ready to proceed. However it is in disconnected state as indicated by a device icon with a slash. This wearable's emulator instance needs to connect with a phone/tablet running Android Wear Preview application over USB now.

Using an USB cable from your computer, connect the device on which you installed Android Wear Preview app (see step 2).
Launch the android wear preview application . 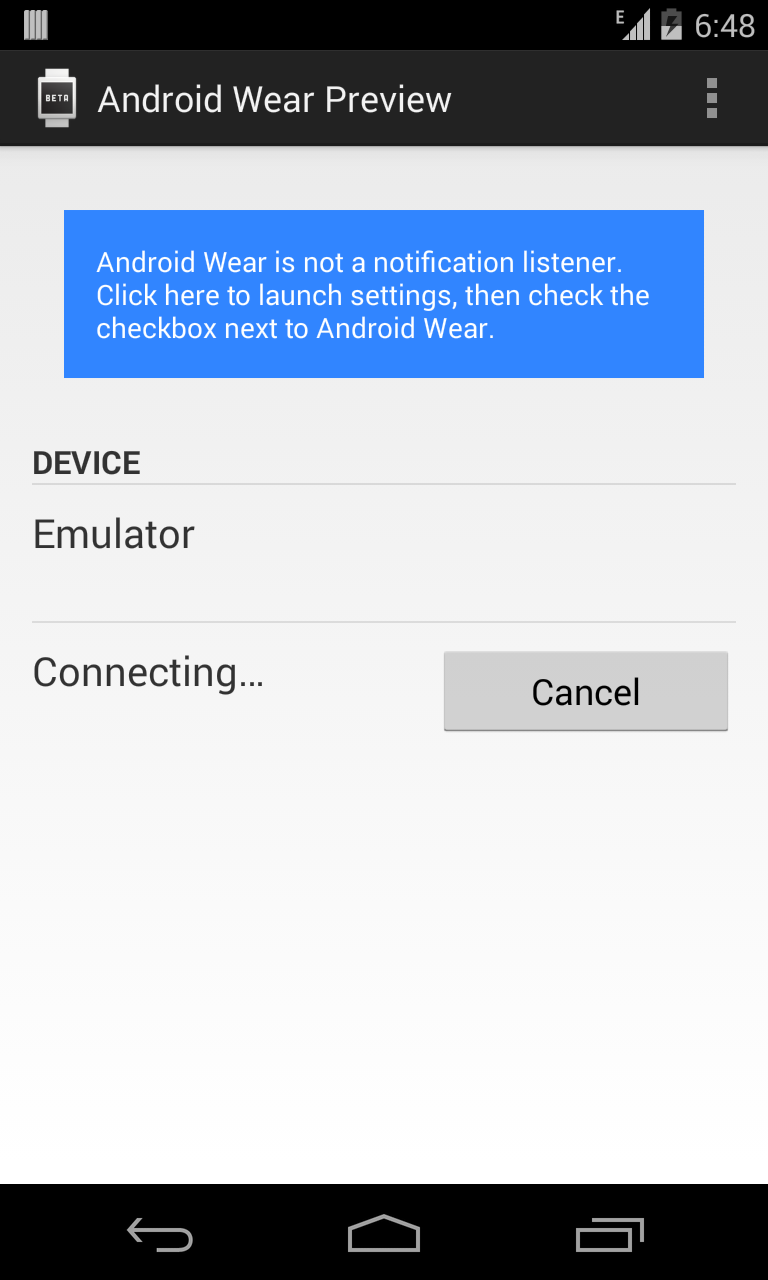 Clicking on the blue banner on the initial screen, takes you to Settings > Security > Notification Access

Here it is listed as a potential application to access notifications but isn't enabled. 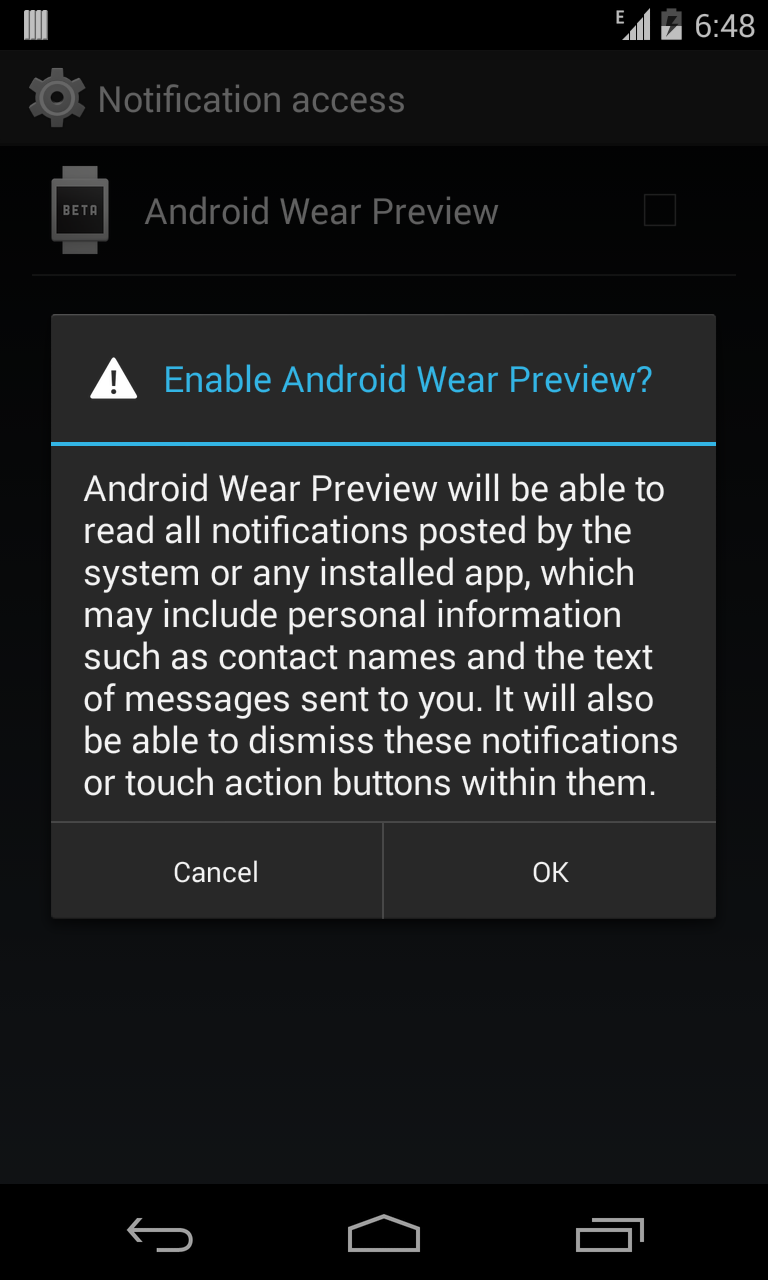 Enable it, read and accept the pop-up dialog.

Now go back to the application. which is still trying to connect with our emulator instance.

To link the two, from command line use:

Note: For this USB debugging must be enabled on your device. Which is done from Settings > Developer options. If developer options is not listed in settings, tap Settings > Build Version for half a dozen times! Not joking. 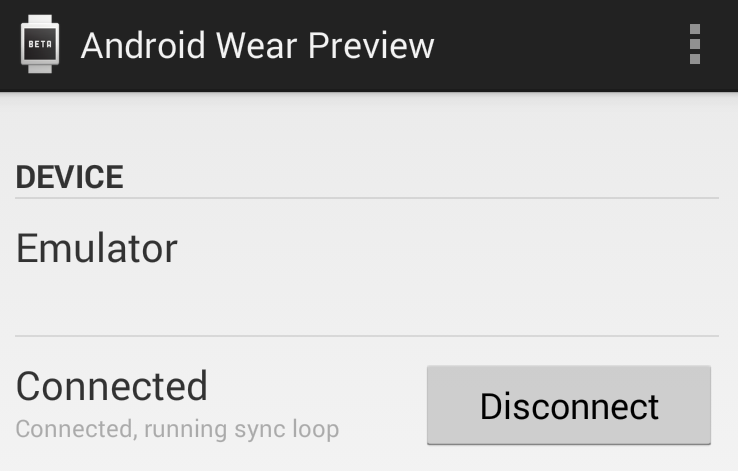 Hope this turns the status from connecting to connected. 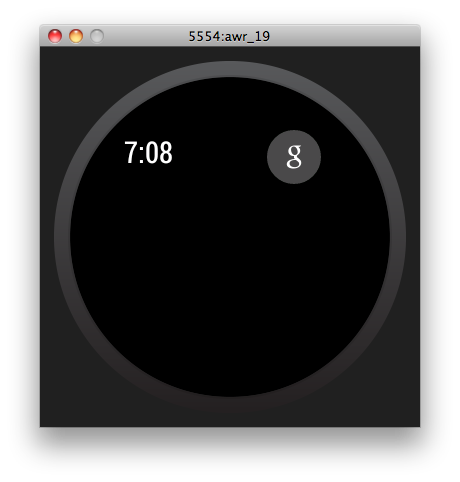 And another important thing to observe is the icon on the emulator has gone from a device with a slash to "g".

Almost all notifications that show up on the phone will now be mirrored to the wearable device's emulator instance. Google plus, gmail, etc already show the notification summary. These are chosen by sliding up on the wearable. Further on sliding to the right on the wearable, actions could be performed. At present the actions are typically limited to opening the respective application.